ROGER BOBB’S FILM “PROVIDENCE” RECEIVES THEATRICAL RELEASE AND PREMIERE ON DECEMBER 15, 2017 IN LIBERIA AT SILVERBIRD THEATERS
ATLANTA, GA. October 23, 2017-  Divine Entertainment Intl, Sky+Orange Productions, Armstrong and Associates in collaboration with BobbCat Films is proud to announce that Roger Bobb’s feature length film “PROVIDENCE” has received a theatrical release and will make it’s world premiere on December 15, 2017 at 7pm at the new Silverbird Theater in TSMO Mall, Mamba Point, Liberia.  The night of the premiere, audiences can expect an evening of elegance.  This is when the stars come out!  There will be a grand style red carpet where attendees will have an opportunity to have their pics taken with our beautiful Hollywood, Nollywood, and Ghollywood cast.  This will be the evening wear event of the year, so please come ready!  Rep your best ball room gowns, African prints, tuxedoes, etc.  Once pictorials and interviews are over, everyone will be ushered into the theater for the first viewing and world premiere of Providence.  This will be followed by a brief Q & A.  At the end of the evening, the producers invite all viewers to a grand celebration with the cast and crew.
The critically acclaimed  film “Providence” discusses the ex-slaves return to Africa after the abolishment of slavery in the American Colonization Society’s pursuit of repatriating the slaves by establishing Liberia, a small America, land of the free.  The movie stars ace Hollywood actress Vivica A. Fox (Generations, Soul Food, Independence Day), award-winning international phenomenon Van Vicker (When One Door Closes, Skinned), Demetria McKinney (Tyler Perry’s House of Payne, The Quad), Lisa Wu (Atlanta House Wives, Hollywood Divas), Siaka Massaquoi (Consinsual), Juliet Ibrahim, Jose Tolbert, Eddie Watson, Shoana Cachelle, and a  host of other international actors and actresses.  Providence was directed by the exceptional director/producer Roger Bobb (producer of numerous Tyler Perry movies/tv shows including Daddy’s Little Girl, Diary of a Mad Black Woman, House of Payne, etc.). Christabel Peters was flown in from the UK to serve as Director of Photography and Gerald Barclay, a reknown US-based editor/filmmaker served as editor.  The film was produced by Dr. Clarice Ford-Kulah, Van Vicker, Roger Bobb, Lisa Wu, Okeke Browne, Elizabeth Armstrong, and Sheela Logan and associate produced by Hesta Baker, Dr. Dawn Cooper-Barnes, Mai Urey,  Carnley Norman, Aries Dean, Gerald Barclay, and Christabel Peters.  The executive producers of “Providence” are Dr. Clarice Ford-Kulah, Van Vicker, Okeke Browne, and Elizabeth Armstrong.
Shot in Liberia, West Africa and Atlanta, “Providence” tells the story of two sisters, two families, two lives that collide in a heart-wrenching tale of love and the pursuit of happiness.  Built upon the backdrop of the ex-slaves (African-Americans) first trip to Liberia and the relationships formed with the indigenous people, Providence explores the history of Liberia and the very fabric of its existence. Richlou Dunbar, an accomplished business man returns to Liberia for the reading of his grandmother’s will and hopes of rekindling a long lost love.  While at grandma’s house, he and Yassah discover his grandma’s diary, opens up and begins to read.  Through instant flashbacks (1822), they journey into an unknown world, a place known as Providence Island, the birth place of the Americo-Liberians.  Through stories in the diary, a beautiful tale of love, trust, betrayal, forgiveness, begin to unravel.  Issues of race, discrimination, oppression unfold as the history of the woes between the ex-slaves and indigenous people that they met there begin to unfold.  Here, we meet Richlou Dunbar, an African-American politician who married into the Smith family to sustain a lucrative position in the government.  He later fraternizes with one of the house maids who subsequently begins a heated affair with her.  Mary’s sister Louisa, who is permiscuous and adventurous has a thing for local guys.  She falls in love with an indigenous man named Flomo, who would later become her husband.  She becomes pregnant for him and is disowned by her family.  Left to suffer with the indigenous people, she assists Flomo in becoming a powerful figure in the community.  However, the discourse between the 2 families will come to last as long as the disharmony between the indigenous and Americo-Liberians that has plagued Liberia since her existence.  Can the feud between these 2 families cease in time to give Richlou and Yassah a second chance at love?  Please join us on this magical journey of love and historical preservation.
For More Information, please contact Dr. Kulah at (404) 200-7789 or Visit our Website at www.providenceislandmovie.com. 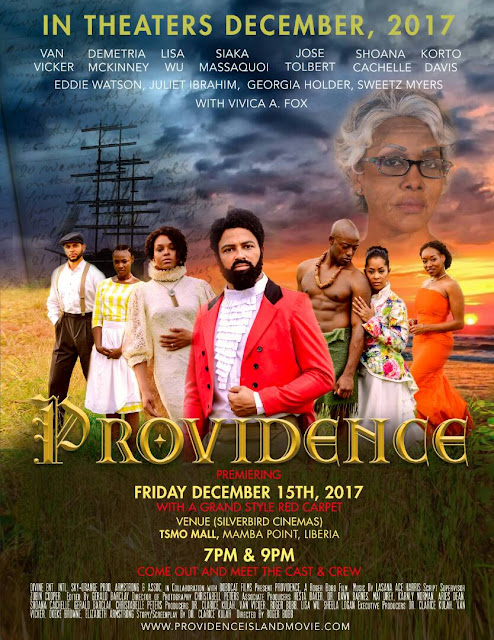 Posted by JMKPublicist at 6:21 AM