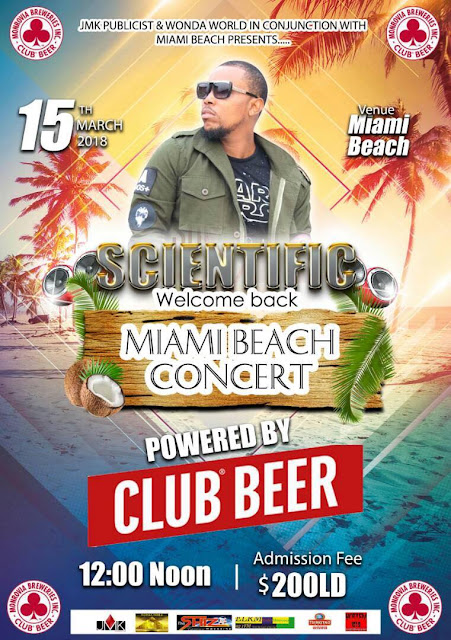 Sonnyboy Tubman known in music business as Scientific aka The Science of Liberian Music has teamed up with the oldest brewing company in Liberia "Club Beer" and  the largest beach in Liberia "Miami Beach" in conjunction with JMK Publicist and Shizo Magazine for his Welcome Home concert upon in arrival from his U.S. Tour on 15th March, 2018 in the heart of Monrovia, Liberia.
In a recent interview with KMTV with Alex Devine, the award winning rapper said this concert will be the biggest concert in the history of his career ever in his own country.
“This concert is my way of helping to promote Liberian music on a major platform. My goal is to give Liberian fans for the first time in history a MEGA CONCERT that will headline by100% Liberian artists produced by Liberians in Liberia. God being so good the ‘Welcome Back Concert’ is out and the fact I have something new to give to my fans, is everything for me and just looking forward to 15th March. Honestly, we’re gonna have a great night,” he said.
The show organized by Wonda World in collaboration with Shizo Magazine and JMK Publicist will be held at the Miami Beach  on the biggest holiday in Liberia J.J. Roberts Birthday (the first President of Liberia).
According to the organizers, even though they were not going to mention names of the particular artistes joining Scientific for the concert, they were hopeful it will be some of the biggest names in Liberian Music right now..
“This concert is going to be out of this world. We are saying expect the unexpected. Anybody who is anybody in music and in Liberia around the world is going to be on this stage. You know that Scientific has had a lot of collabos, so you can imagine a lot of those people that have been working with him are going to turn up,” the organizers said.
This concert is set to be the biggest concert to hit Liberia by Liberians for Liberians.
Posted by JMKPublicist at 4:09 AM